A Michigan man has been charged with threat of terrorism and using a computer to commit a crime after he made death threats against President Joe Biden, U.S. Speaker of the House Nancy Pelosi and Michigan Gov. Gretchen Whitmer, . Joshua Docter, 21, allegedly threatened to shoot and kill all three and \"'be the catalyst' for a new American revolution,\" police said. He turned himself in Tuesday.

\"Threatening elected officials is against the law and my office will prosecute those who attempt to intimidate or terrorize our state and federal leaders,\" State Attorney General Dana Nessel said in a statement.

\"In those posts, Docter stated he would use a gun to shoot and kill the elected officials and would 'be the catalyst' for a new American revolution,\" Nessel continued, referring to the threats that were made in late January.

Docter reportedly had instructions on how to make a bomb on his phone. He was released on $5,000 personal-recognizance bond.

Prince Harry has spoken to his father and brother after he and his wife Meghan Markle raised allegations of racism in the royal family during an explosive TV interview, a friend said Tuesday.In the interview, Harry said that his father Prince Charles had cut him off financially and at one point stopped taking his calls, and he also described his damaged relationship with Prince William.

Harry and Meghan, whose father is white and mother is Black, now live in California after stepping away from royal duties.

The British monarchy has been rocked by the couple's allegations that an unnamed royal asked how dark their child's skin would be before he was born.

\"I did actually call them to see how they were feeling, and it's true Harry has talked to his brother and he has talked to his father too,\" Gayle King, a US television presenter and friend of the couple, said on CBS.

\"The word I was given was that those conversations were not productive, but they are glad they have at least started a conversation.\"

King said the couple were \"frustrated\" that alleged racism in the royal family had dominated the news agenda since the interview was broadcast on March 7.

\"All they wanted all along was for the royals to intervene and tell the press to stop with the unfair, inaccurate, false stories that definitely have a racial slant,\" King said.

She added that Harry and Meghan wanted \"healing\" in the family, but that Meghan had \"documents to back up everything\" she had said in the interview with Oprah Winfrey.

The allegations, which the royal family said would be investigated, have plunged the monarchy into its biggest crisis since the death of William and Harry's mother, princess Diana, in 1997.

Meghan, a former actress, told Winfrey she was \"naively\" unprepared for life as a royal and had contemplated suicide while pregnant with their first child. 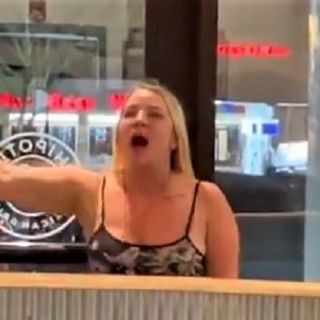 'This is modern-day segregation!' Anti-masker melts down and trashes Las Vegas Chipotle

Brad Reed
in
rawstory.com
Published: March 16, 2021  |  7 min read, 1405 words
--Screen cap / TikTokA woman in Las Vegas was caught on camera recently throwing a tantrum over face masks at a Chipotle in which she compared mask mandates to racial segregation.The video begins with the woman ripping her face mask off in front of Chipotle workers and screaming,...
Read more